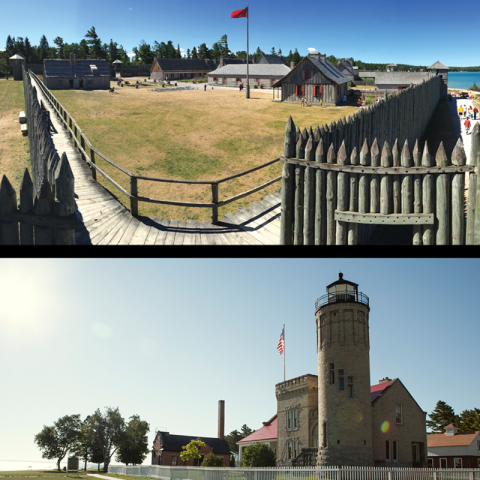 The top photo is Colonial Michilimackinac. The bottom photo is the Old Mackinac Point Lighthouse. 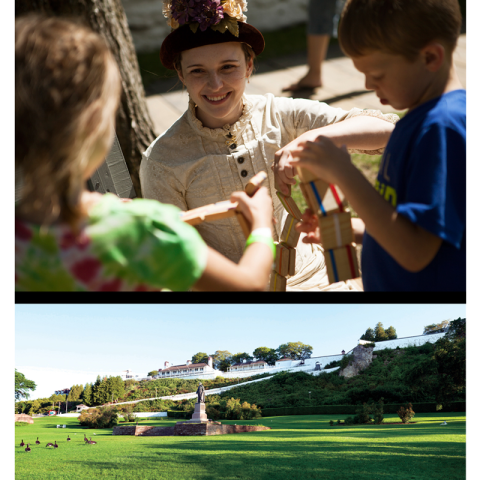 The photo on top is a woman in a Victorian costume helps a young boy and girl play a game at Fort Mackinac. The bottom photo is Fort Mackinac.

Colonial Michilimackinac (mish-ill-ih-mac-ih-naw) turned 300 in 2015! Hands-on activities, including cooking and crafts, teach about the French, British, and Native Americans that lived in the area in the 1770s. You can even see and hear a cannon being fired. The French built a fur-trading village and fort at the northern tip of the Lower Peninsula of Michigan in 1715. The area was an important stop in the trade of furs from the western Great Lakes to eastern cities. The British took control of that fort in 1761. Then they decided to build a new fort on Mackinac (mack-ih-naw) Island in 1780. That fort was called Fort Mackinac. Both Colonial Michilimackinac and Fort Mackinac are part of Mackinac State Historic Parks. For more information, go to www.mackinacparks.com.

All the photos are from Mackinac State Historic Parks.