Award-winning Michigan historian Larry B. Massie and his wife, Priscilla, have donated to the Historical Society of Michigan (HSM) approximately 7,000 copies of books he has written. 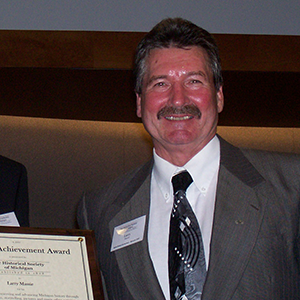 LANSING, Mich.—Award-winning Michigan historian, prolific author and dynamic storyteller Larry B. Massie and his wife, Priscilla, have donated to the Historical Society of Michigan (HSM) approximately 7,000 copies of books he has written, including seven popular titles.

Over his career, Massie, pictured above right as a recipient of HSM’s Lifetime Achievement Award in 2007, assembled a 45,000-volume library focused on Michigan history near his home in the Allegan State Game Area. The couple has also made significant book donations to the two Portage high schools and the South Haven Historical Society. The Larry J. Bell Library Foundation of Kalamazoo purchased about half of the Massies' antiquarian book collection, and the couple has donated to the Foundation the other half of the books.

In 2021, Massie was the recipient of the Library of Michigan’s Author Award, which was established in 1992 to recognize significant authors in the state. He has lectured frequently on Michigan history topics at schools, libraries, universities, festivals across both peninsulas and HSM history conferences. Massie has written 22 books about a wide variety of aspects of Michigan’s amazing history.

“I have enjoyed telling the story of Michigan’s past for decades,” Massie said. “Putting some of my books in the hands of the Historical Society of Michigan will ensure that people in our state and beyond will have access to those stories for a long time to come.”

Larry J. Wagenaar, HSM's executive director and CEO, said, “We are incredibly grateful for Larry Massie’s generosity in sharing his work with HSM, which will help expand the reach of our Michigan history education mission. Larry has the ability to bring history alive in person and in the pages of his books, and this allows him to continue to connect with people of all ages.”

The inventory of titles Massie has donated to HSM are:

Massie was born in Allegan in 1947, graduating from Allegan High School in 1964. He is a disabled veteran and has three degrees from Western Michigan University (WMU). He previously worked as an archivist at WMU before becoming a freelance historian and shifting his focus to writing.