When the Civil War began in 1861, African Americans were not allowed to fight. That changed in 1863. Michigan’s African-American volunteers became the 102nd USCT (United States Colored Troops). About 1,400 men from southern Michigan and Canada joined the 102nd. Many of those men had escaped from a life of slavery. One of those men was Jessie Hill.

Jessie Hill was born in South Carolina as a slave. But he escaped to Canada. One day, a man came to Jessie’s village in Canada. He asked if any of the former slaves living there would be willing to go back to the United States to fight for the Union. Jessie and 50 other men raised their hands to volunteer.

The 102nd fought in about 10 battles in South Carolina, Florida, and Georgia. They fought bravely and proved that they were just as good at being soldiers as anyone else. Jessie Hill received a medal of valor (vah-ler) for his bravery in a battle near his hometown in South Carolina.

Jessie was asked why he would return after finding his freedom in Canada. Jessie said that he liked what the country was trying to become. But he wanted the same rights as everyone else. And he was willing to fight for that freedom.

This story was written by Lutullus Penton Jr. The photo is from the author.

Click here to learn more about the Civil War 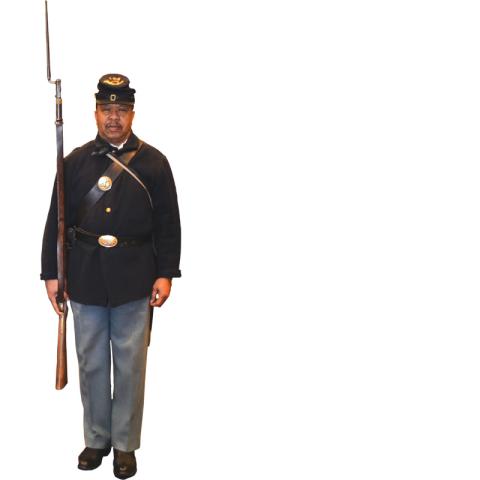 This is a photo of the author dressed as Jessie Hill. During the Civil War, 11 soldiers of the 102nd died in battle and 129 died from being sick.