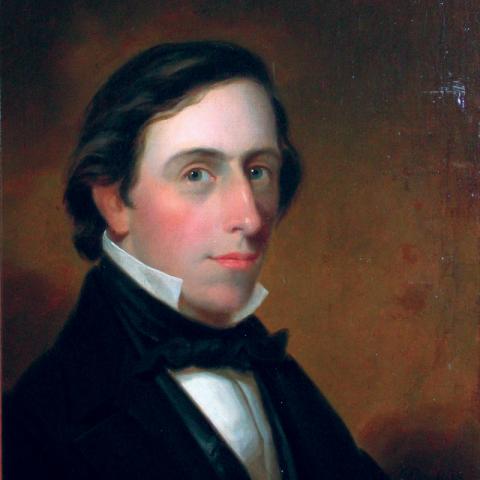 Douglass Houghton (hoe-ton) was born in 1809 in New York. He liked learning about medicine and science. Douglass was very smart. So he was asked to come to Michigan to teach others. He came to Detroit in 1830 and taught about geology, or the study of rocks.
In 1831, he was asked to take a trip through Lake Superior and the Upper Peninsula (pen-in-sue-la) to see what he could find. It was during that trip that Douglass heard there was copper in the Upper Peninsula. When he got back to Detroit, he told about what he heard. The territorial (tear-ih-tor-ee-al) governor, Lewis Cass, ordered him to search for the copper.
In 1832, Douglass went back to the Upper Peninsula. He found rocks filled with copper in the Keweenaw (key-wa-naw) Peninsula. After Michigan became a state in 1837, Douglass was made the state’s first geologist. A geologist studies natural resources (natch-er-ul ree-sor-ses).
In 1840, Douglass wrote a report about the copper in the Upper Peninsula. When people read that report, many migrated, or moved, north to start mining the copper. Douglass became known as the “father of copper mining” in the United States.

This story was written by Jodi Lynn Fry. Jodi worked for the Historical Society of Michigan. The photo is from Wikimedia Commons.