Announcing the Winners of the 2022 State History Awards

The Historical Society of Michigan (HSM) announces its 2022 State History Award winners. The winners receive their awards during the Annual Meeting and Michigan History Conference on September 23-25, 2022, in Albion.

Announcing the Winners of the 2022 State History Awards 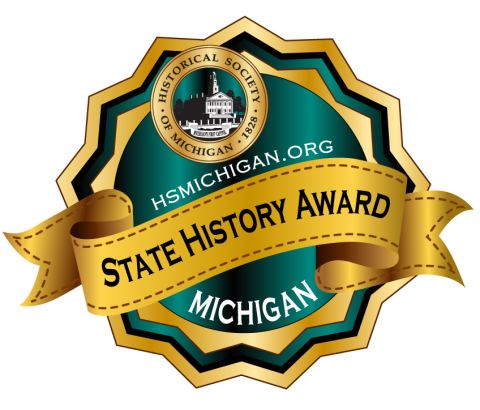 LANSING, Mich.—The Historical Society of Michigan (HSM) announces its 2022 State History Award winners, who will be recognized during the Annual Meeting and Michigan History Conference on September 23-25, 2022, which will take place in Albion. The Society presents the State History Awards every year to individuals and organizations that have made outstanding contributions to the appreciation, collection, preservation and/or promotion of state and local history. The awards are the highest recognition presented by HSM, the state’s official historical society and oldest cultural organization.

The Annual Meeting and Michigan History Conference explores significant people, places and events in Michigan’s past through a diverse offering of keynote speakers, breakout sessions, workshops and tours. The 2022 event features unique content focused on the history of Albion and the surrounding mid-Michigan community. Standard registration ends on September 15, 2022. Registration details and full session descriptions are available on HSM's website.

HSM will recognize Thomas F. Trombley of Saginaw with the 2022 Lifetime Achievement Award, the Society's capstone award. Thomas Trombley started his career at the Castle Museum of Saginaw County History in 1981 as its curator of collections. He was a construction specialist with Neighborhood Renewal Services of Saginaw and currently serves as the Castle Museum’s vice president and chief historian. Trombley played an instrumental role in restoring and interpreting the formal garden at the Saginaw Art Museum and researched plans for the restoration of the museum's E. Irving Couse Gallery. He helped found the Jazz on Jefferson committee, created a program about the architectural history of Saginaw’s Hoyt Public Library and is a popular lecturer on many history topics.

The 2022 State History Award for Distinguished Volunteer Service will go to Risha B. Ring of Bloomfield Hills. Ring volunteered with the Jewish Historical Society of Michigan for several years before taking the role of secretary in 2017. The succeeding four years saw significant transformation within the organization. She cultivated collaborative partnerships with universities, historical societies, arts organizations, Jewish organizations and funders. New programming standards grew the Jewish Historical Society of Michigan's audiences nationally and internationally.

Michael S. Nassaney of Kalamazoo will receive the 2022 State History Award for Distinguished Professional Service. Nassaney has introduced archaeology in southwest Michigan to an audience of academic scholars, students of all ages and the general public. In the late 1990s, he initiated an archaeological investigation of the Fort St. Joseph site in present-day Niles, Michigan, which continues today. His work has revealed details of the lives and combined cultures of colonial French newcomers and the resident Native Americans. The Fort St. Joseph Archaeology Project has become a model for the intersection of academic and public history. Nassaney has mentored dozens of students and has produced and contributed to books, journal articles, papers, public lectures, museum exhibits and more.

The 2022 History Hero Award will be presented to Eugene B. Wanger of Lansing. Eugene Wanger, an attorney and a longtime opponent of the death penalty, authored Michigan’s death penalty ban when he served as a delegate to the Michigan Constitutional Convention of 1961. He and his wife have both been members of the Bar of the Supreme Court of the United States for more than 50 years and are valued life members of HSM.

HSM will present a State History Award in the category of Books: University & Commercial Press to "'No Equal Justice': The Legacy of Civil Rights Icon George W. Crockett Jr." by Edward J. Littlejohn and Peter J. Hammer, published by Wayne State University Press. This book traces the life of attorney, judge and civil rights icon George Crockett Jr. from poverty to the courtroom. In 1934, he was the only African American to graduate from the University of Michigan Law School. He served as an attorney in the Franklin Roosevelt Administration and then played a key role in fighting racial discrimination in the United Auto Workers. In 1952, during the height of the Red Scare, Crockett went to prison for defending the constitutional rights of leaders of the American Communist Party.

Steven C. Brisson will receive a State History Award in the category of Books: University & Commercial Press for "Architectural Missionary: D. Fred Charlton in Michigan’s Upper Peninsula, 1887-1918," published by Michigan State University Press. In this book, Brisson provides readers with an in-depth study of a prolific U.P. architect. His book is filled with photographs and architectural drawings of many Charlton-designed structures and includes descriptions of the buildings and how they came about, including such prominent structures as the Marquette County Courthouse, Iron Mountain High School and St. Anne’s Church in Calumet.

HSM will present a State History Award in the category of Books: University & Commercial Press to the late Carl Levin for his book "Getting to the Heart of the Matter: My 36 Years in the Senate," published by Wayne State University Press. Senator Levin passed away in 2021, but before his death, he completed a memoir that traces his life from his childhood in Detroit through his work on the national and international stages. He served as a U.S. senator from 1978 to 2015, chairing the Senate Armed Services Committee and the Permanent Subcommittee on Investigations.

HSM will present a State History Award in the category of Books: Private Printing to Mary Jane Doerr for "The Songs of J. Will Callahan, Tin Pan Alley’s Blind Lyricist," published by the author. After J. Will Callahan’s eyesight failed, the one-time assistant to poet J. Whitcomb Riley began writing lyrics for ragtime composers. Callahan and his wife bought a summer cottage in Bay View, and it was there that he wrote many of his wildly popular lyrics. "Smiles," his best-known song, debuted in 1917 during World War I and sold 5 million copies. "Tell Me," written to a Max Kortlander composition, was recorded by both Judy Garland and Al Jolsen.

Nicholas A. Marsh will receive a State History Award in the category of Books: Private Printing for "The Railroad King: James F. Joy," published by the author. James F. Joy was a pivotal Detroit lawyer and railroad builder whose steel rails stretched over thousands of miles of the Midwest. Joy’s contributions to Michigan history, however, went far beyond rail transportation. He was a state lawmaker and an author, helped build the Soo Locks, served as a regent of the University of Michigan and cofounded the Detroit College of Medicine.

The 2022 State History Award for Books: Children & Youth will be awarded to Ann Dallman for "Cady and the Birchbark Box." The book continues the adventures of Cady Whirlwind Thunder, a proud member of the Potawatomi, as she learns more about her Native culture. Cady’s attempt to unravel the story behind a small journal hidden in an old birchbark box takes her deeper into her culture as she learns from her father, her grandmother and tribal elders. Solving the mystery brings Cady even closer to her traditional beliefs.

A State History Award in the category of Education: Educational Programs will be awarded to the Dearborn Historical Museum for its "Pioneer School Program." The museum hosts about 1,400 students every year who join in five carefully planned interactive learning stations. Students enjoy the Rouge Gateway Trail, a 19th-century classroom lesson in the Pioneer School room, churning butter in the McFadden-Ross House kitchen, experiential learning in the 1831 Gardner House and a lesson in planting seeds.

Robin Hacker Walter will receive a State History Award in the category of Education: Educator for her excellence in work at the Flat River Historical Society and Museum in her hometown of Greenville. After retiring as a classroom teacher, Walter took up a second career in education as a volunteer for the local historical society. There, she coordinates school tours, outreach programs and community programs about clothing fashions, wedding ceremonies and transportation. As a Master Gardener, Walter has renovated and maintained the museum’s Victorian Garden.

The 2022 State History Award for Media will go to the video documentary "A Legacy of Memories: Silver Beach Amusement Park." The video explores the history of one of the Midwest’s most popular entertainment venues that once stood on the sandy Lake Michigan beach in St. Joseph. Vacationers enjoyed a roller coaster, a penny arcade, a fun house and swimming in Lake Michigan. During the Big Band Era, a dance hall attracted some of the biggest names in music. The hour-long documentary includes hundreds of vintage photographs and a narrated history of Silver Beach.

The 2022 State History Award in the category of Restoration/Preservation will go to the Leelanau County Historic Preservation Society for its restoration of the original Leelanau County Poor Farm Barn. Leelanau County built the barn in 1911 to replace a structure destroyed by fire. After farming operations ceased, the barn and other structures fell into disrepair. The society’s restoration project, begun in 2018, repaired the barn’s foundation, replaced deteriorated framing timbers, replaced a long-gone cupola and repainted the building.

HSM will present a State History Award in the category of Special Programs/Events to the Albert Kahn Legacy Foundation for its exhibit "Albert Kahn: Innovation and Influence on 20th Century Architecture." Kahn’s famous designs include the Detroit Arsenal Tank Plant, the Fisher Body Plant and the Willow Run B-24 bomber factory. The new exhibit showcased Kahn’s work with images, documents, videos and artifacts. Exhibit designers used Lego blocks to create models of some of Kahn’s buildings, including an eight-foot-tall model of the Fisher Building in Detroit consisting of more than 120,000 Lego pieces.

A State History Award in the category of Local Societies will be awarded to the Flat River Historical Society for its work in interpreting the history of the Greenville area. The society has created all-new exhibits, revamped its Victorian Garden, remodeled its office and storage area and improved accessibility. It hosts a wide variety of school tours, educational programs and community events.

A State History Award in the category of Institutions will be awarded to the Center for Michigan Jewish Heritage. This organization excels in its mission of preserving and sharing the primary-source history of Jewish Michigan. The center is home to the Leonard N. Simons Jewish Community Archives and the Rabbi Leo M. Franklin Archives. The Simons Archives focuses on historical documents of Jewish Detroit, while the Franklin Archives of Temple Beth El ranks among the largest comprehensive congregational archives in America.

Valerie R. Marvin will receive the 2022 State History Award for the Best Article in Michigan History Magazine for her article, "Librarian, Curator, and Leader: The Transformative Harriet Tenney." The article appeared in the magazine’s July/August 2022 issue and described the career of Michigan’s first female state officer, first female state department head, pioneering librarian and founder of the first state museum. Harriet Tenney served as state librarian from 1869 until 1891, and her successor, Mary Spencer, served from 1893 until 1923. During her career, Tenney also cleared a path for other women to enter state government service. Marvin’s article has highlighted the career of a true leader in Michigan history.

The 2022 State History Award for the Best Article in Chronicle Magazine, HSM's membership publication, will go to Russell M. Magnaghi for his article titled, "Terror Dressed in White: The KKK in the Upper Peninsula." The article appeared in the magazine’s Summer 2021 issue and examined the rise and fall of the Ku Klux Klan in the Upper Peninsula. During its peak in the 1920s, the Klan targeted the region’s Catholic immigrants with marches, cross burnings and other demonstrations.